This week we’re implementing the Grand Exchange Tax and adding some long-awaited PvP changes! In other news, we've got a range of exciting, Christmassy things in the Official Merch Store - so you'll learn all about those, too.

The Grand Exchange interface has also been updated to clearly show how much tax you will pay when selling an item. This can also be tracked when viewing the offer status for any sale, so as a seller, you will always be able to see your bottom line - so don't worry about hidden costs!

From Top to Bottom:

Status of an existing offer where tax is charged, below the 5m cap.

Setting up a new offer where tax is charged, below the 5m cap.

Setting up a new offer, where tax is charged, above the 5m cap.

We’ve also updated the player-to-player Trade menus, preventing the ‘Accept’ button from being pushed for a few seconds after either player changes the items in the trade. This should give buyers and sellers the chance to spot any scams, but if you need to trade quickly – such as in certain PvM situations – or if you’re confident taking the risk, you can opt out of the delay completely.

In case you missed it in last week’s post, here are some examples of how the tax shakes out in different trades: 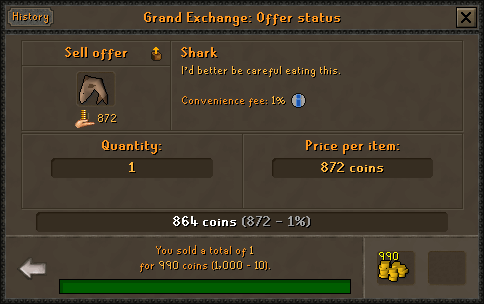 Here's a list of items exempt from the tax. Most of these are tools used by new players, as such we'd prefer not to inhibit trade on such items:


Bonds are also exempt from the tax since they already charge a fee when they’re converted from non-tradeable to tradeable. The Grand Exchange menus will clarify which items have fees.

We’ve also implemented the previously-mentioned Item Sink system, which will help with inflation by using the tax collected from sales to purchase various expensive items from sellers, then delete those items once the trade is complete. Here’s how that works in detail!

When a taxed trade takes place through the Grand Exchange, part of the taxes paid will be consigned to a virtual coffer. An automatic system will then use those funds to purchase specific items, chosen by us. The system decides which items to buy based on the estimated quantity of the item entering the game per day and the amount we’d like it reduced by.

Various things can happen when a player creates a Sell offer for one of these items:


While we agree that lots of items would benefit from a reduced supply, we want to start small. A shorter list lets us monitor exactly how much money is coming in and out of the game, and how player behaviour changes in response.

For now, here are the eligible items:

The team will actively monitor the markets and your feedback with a view to adding more items to this list in future.

For those unfamiliar with PvP, when attacking another player you receive a PK Skull marker which lasts for 20 minutes. In this time, it’s possible to get into a fight with someone with 19 minutes and 30 seconds left, causing the marker to disappear during combat. This means that in addition to losing your Skull, there’s a chance your opponent will receive a Skull from hitting you – negating your own risk and adding to theirs. To fix this, we’ve made it so that PvP Skulls no longer time out while in PvP combat.

We’re also addressing the issue of Skulltricking. Skulltricking takes various different forms, but ultimately, the end goal is the same – to trick an unsuspecting victim into attacking another player and gaining a Skull. This week’s update adds a new setting in the Control Settings interface which restricts attacking other players if that action would result in you getting Skulled.


Please note that this setting is always disabled on DMM worlds.


Lastly, the Looting Bag can now be used in Ferox Enclave.

We’ve also made a bunch of changes to the New Client Features!